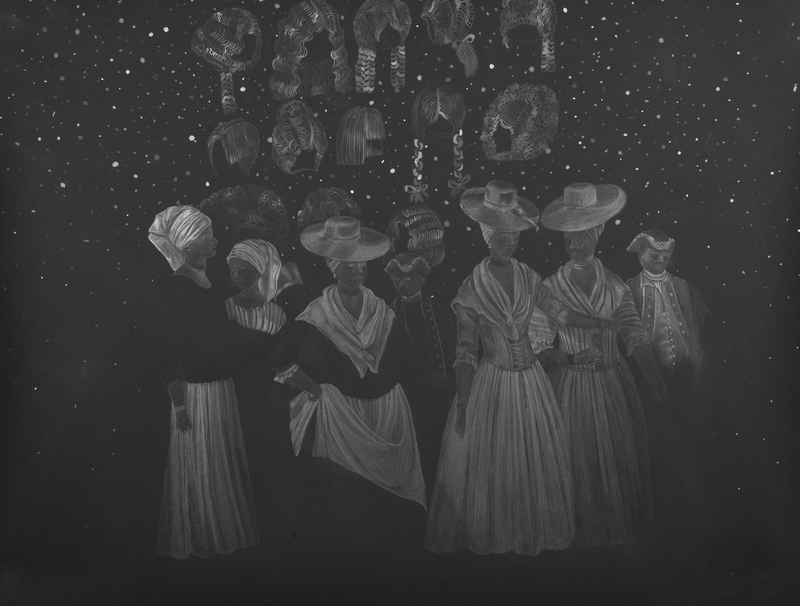 Midnight Dialogues, explores the historical lineages of drawing and the invention of the avatar as a political tool. In these drawn works I reference tableaus from the Brésil Panoramiques and other French panoramic wallpapers. These signature printed materials were a feature of Victorian luxury home design, and would often depict scenes originally drafted as ethnographic studies, or travelogues by colonial Europeans abroad, thus re-presenting people who existed on the margins of colonial time. This panoramic imagery became a visual way of transporting people as ideas, or avatars, through time and into a commodity form, one commingled with Western political imagination of gender and race. I use the formats of panoramic wallpapers and maquette-style drawings to create a series that narrates a fictive kinship and family history, embodied by a line of women during the colonial period who merge into a hydra figure to consolidate their power and resistance towards the state. In these drawings I think about political identity and embodiment, referencing how black labor was absorbed and constitutive to the Western optics and aesthetics of free will and identity construction. Through this project I have begun to think more about contemporary moments of economic speculation, and how these periods mirror earlier episodes of land extraction, embodied labor, and economic disparity being performed as identity for global markets.